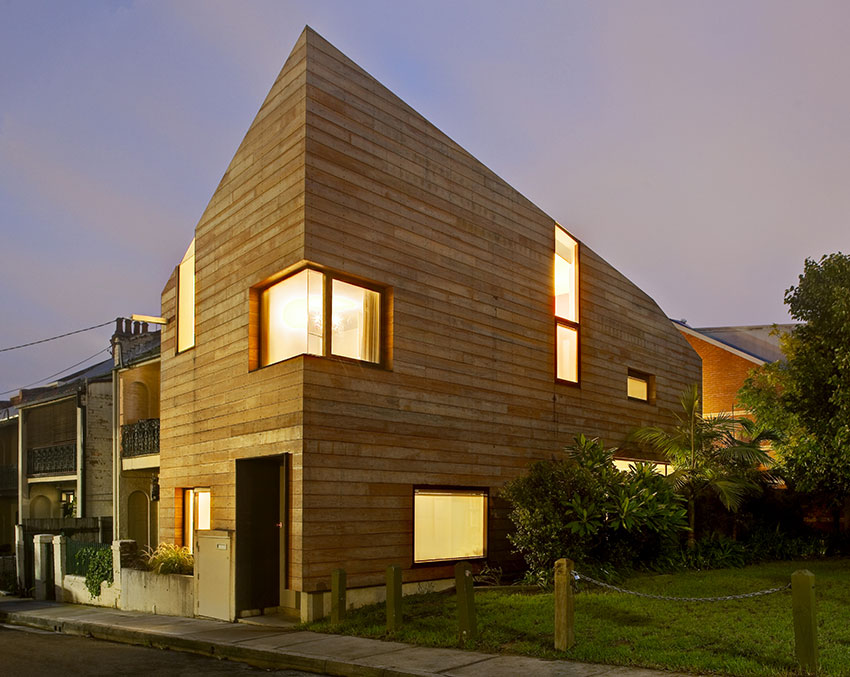 On one corner, adjacent to a small park, sits a new timber house dubbed The Ark by a few of the local residents that sits in contrast to its neighbouring narrow terrace housing and multistorey apartments. Clad in timber already weathering to a dull grey from its initial bright orange, wedge-shaped and pointing to the sky, the house is a striking departure from its context. The house is modelled as though it were a carved solid piece of timber with punctured openings that wrap around the corners of the volume. These windows and the joins of the folding geometry have been carefully detailed so that the house reads as a solid and sharp-edged object. Andy Macdonald of Mac-Interactive, the architect of the project, points out that the timber cladding never touches the ground, sitting slightly up off a sturdy concrete base at the front and lifting up at the rear to sit on top of the concrete wall that addresses the park. At the rear of the house the master bedroom is given a more straightforward large aperture framed in timber, looking over the garden. It is a point at which the strength of the carved volume is partially diminished, as the strategy for making openings in the surface alters, and perhaps an opening like those made elsewhere in the timber volume, puncturing the timber and wrapping around the corner, would have maintained the sense of solidity at this point. Stepping inside through a folded piece of steel road plate, down a few steps into the entry, reveals a rich interior of polished concrete floors and elaborate joinery. The owners sought a house that was not the white box. This interior delivers on this with a multitude of nooks and shelves for their varied collection of furniture, art and artefacts. And toys. The central element of the house, the stair, is wrapped in the kitchen, living room joinery, fireplace and bathrooms. It is a compact and efficient piece of planning that makes the most of its small footprint to pack in as much storage and utility as possible. The two primary living areas are arranged on the ground floor on either side of this stair, notionally divided into passive and active entertaining. The entry space is for passive entertainment, with a fireplace in one corner and the television cleverly concealed within the joinery, while the back room, day-lit by clerestory windows and opening onto the garden, caters to the active social life of the house. Generally, materials are subdued: timber veneer, white walls and exposed finished concrete. The bathrooms, however, are more indulgent, each with a different palette of materials: nineteenth-century print pattern on gold wallpaper in the lower bathroom, timber-patterned ceramic floor tiles in the ensuite and camouflage tiles matched with off-white brick-patterned wall tiles in the upstairs bathroom. The winding of the stair vertically through the spaces, the overlapping geometry and the double-height spaces of the upper floors give the house a strong interiority. Not that it is a dark, enclosed space. The large windows that slice through the walls and roof invite abundant daylight into the house and, on the gloomy rainy day that I visit, it is filled with light. While the typical terrace house typology favours turning its back on the street and focusing on the private rear of the site, this house (aided by being on a corner next to a park) situates its openings around the house, connecting it to the immediate context of dense inner-city housing. This is an accomplished and ambitiously contemporary piece of architecture representing a radical departure in form from the terrace houses in the street. At the same time, the army men on the bath indicate that it is an actively lived-in house, at times functioning as the neighbourhood playground, open and inviting and welcoming a touch of adolescent anarchy. - Marcus Trimble for Architecture AU 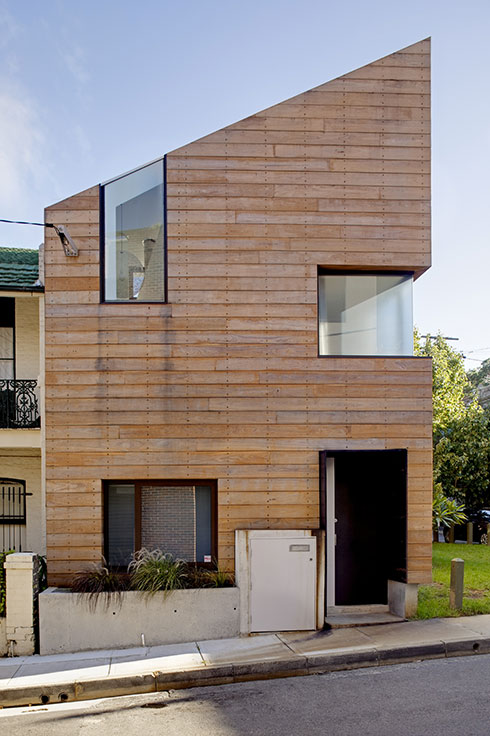 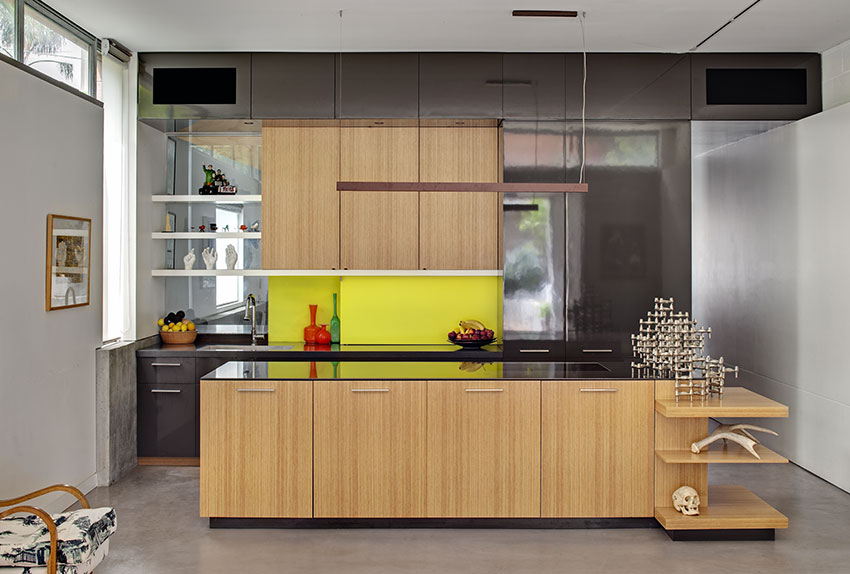 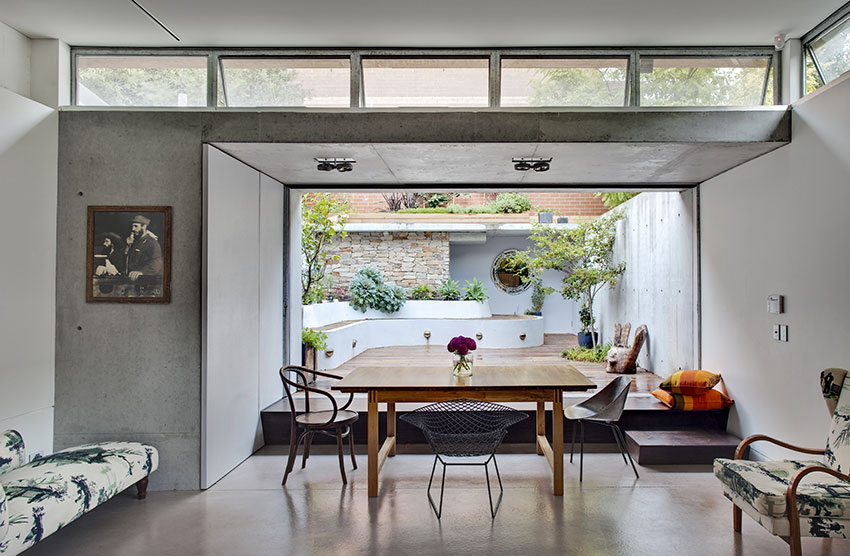 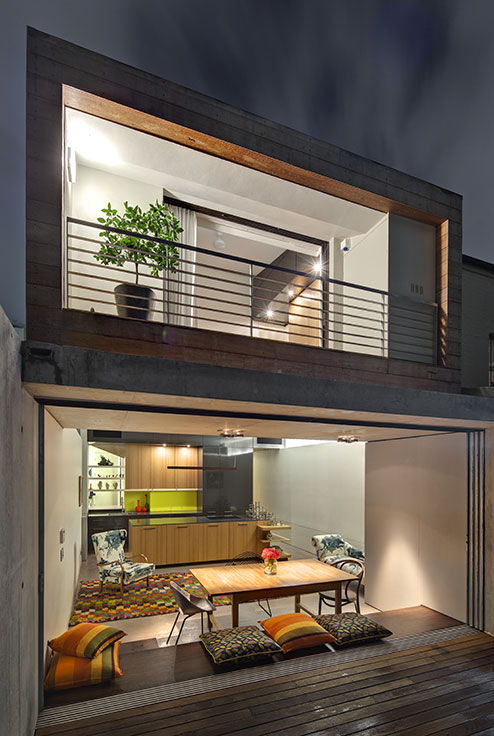 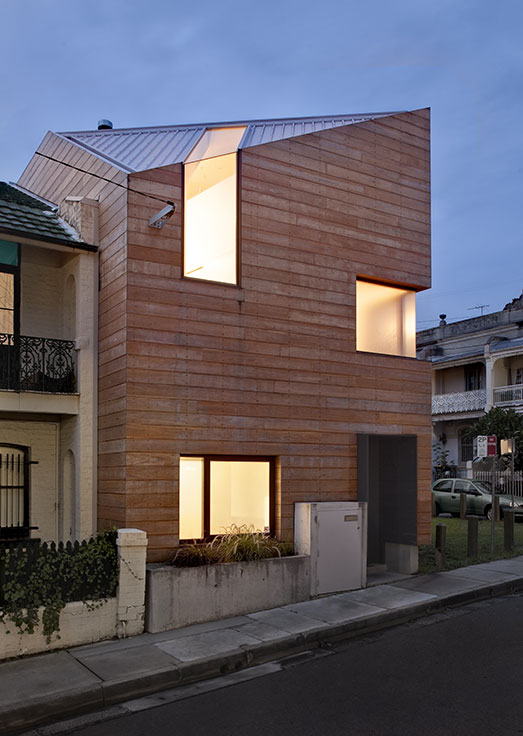